Bhaalo Naam vs Daak Naam: What's in a name? (Part-I) 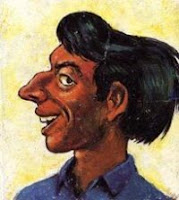 A Bengali has two names: bhaalo naam (good name or formal name) and daak naam (pet name or nick name). Those who have read or watched Jhumpa Lahiri's "The Namesake" should be familiar with this concept. Whenever a Bengali baby is born, s/he is not immediately bestowed with a bhaalo naam. The search for a bhaalo naam is a ritual in itself. It is deliberated upon by all and sundry with generous contributions from the innumerable uncle-aunties (Kaku-Kakimas, Jyethu-Jyethimas, Meshomoshai-Mashimas, Pishomoshai-Pishimas), grand parents (Dadu-Didimas, Thakurda-Thakumas), neighbours (pada-protibeshis), office colleagues (sohokormis) and friends (bondhu-bandhab). Even the maid (kajer-lok, the male of the species is ingeniously called 'combined hand'), friend's neighbours, colleague's friends, neighbour's colleagues and finally the family Gurudeb - the great and revered 'Baba' or 'Swamiji'. Till such time a suitable bhaalo naam is collated, analyzed and agreed upon... the Bengali baby is addressed by his/her numerous daak naam, which are quite phenomenal, so to speak.

Now, daak naam(s) are more character oriented and heavily dipped in love, affection, and creativity. Therefore they generally do not have any bearing with the bhaalo naam whatsoever. It is also important to understand that the number of pet names a Bengali baby has, is directly proportional to the number of relatives and neighbours his/her family is blessed with or are in good terms with. So a Bengali boy can be 'Babu' or 'Babushona' to his mom (Ma), 'Babai' to his dad (Baba or Bapi), 'Dadubhai' to his grand dad (maternal: Dadu and paternal: Thakurda) and grand mom (maternal: Dida, Didima, Didu or Dimma and paternal: Thakuma or Thamma) but can be called 'Papa' or 'Papu' by his friends, 'Gola', 'Gablu' or 'Motu' by his cousins and 'Tendulkar' by his cricket crazy neighbour. Errr... on second thoughts may be 'Zico' or 'Pele' or even 'Garincha' and 'Kaka'.
Read the friendly discussion on football in ABCD (debutant author Suparna Chatterjee's novel "The All Bengali Crime Detectives") - you'll know how much clued into football an average Bengali is (was?) - even though there were/are hardly any grounds or place to play the beautiful game in Kolkata! There was a time when a game of football between Mohun Bagan (supported by the "Ghotis") and East Bengal (supported by the "Bangals") would bring the whole city to a standstill. Roads would be deserted while offices would register thin attendance... people having somehow succumbed to all sorts of diseases on that very day. Just watch the grand old man of Bangla comedy Bhanu Bandopadhyay's - "Personal Assistant" - where his friend (played by the superb yet ever neglected actor Tarun Kumar) comes up with 'half-cholera' as an excuse for Bhanu's absence from work! But hospitals and nursing homes would strangely not be flooded with patients; rather they too would wear a deserted look... with the doctors and other medical staff having summarily done the Houdini act.

The prices of Chingri maach (prawns, especially 'golda chingri' or tiger prawns and not 'kucho chingri' or shrimps) and Ilish maach (hilsa) would fluctuate according to the fortunes of the two clubs in question. The "Ghotis" patronized the chingri maach and were reassured of their true blue, unadulterated "Ghotiness" only by it, while the "Bangals" attained nirvana courtesy the Ilish maach. And till date only the "Bangals" know how to negotiate their way through this tasty minefield of fish thorns... and they continue to guard this fish version of the Holy Grail like secret quite zealously. Either way, the fishermen and the fishmongers made merry whatever the outcome on the field. And the price of these fishes pole-vaulted to unimaginable heights, courtesy the humble football. 'Capitalism' in all its glory. No?

I would recommend connoisseurs of good cinema to watch the Uttam Kumar-Sabitri Chattopadhyay-Jaya Bhaduri-Jahar Roy starrer "Dhonni Meye". It is a laugh riot. Those who do not understand Bangla can watch this classic with English subtitles. Some of the punch and flavour may be lost or diluted... but that's inevitable. Just like the delectable rosogollar payesh and the rasmalai - but both are yummy in their own right. Right?
Not to forget the Uttam Kumar-Suchitra Sen-Bhanu Bandopadhyay-Chobi Biswas classic "Ora Thake Odhare". Even "Mohun Baganer Meye" (tr: Daughter of Mohun Bagan) is not to be missed. "East Bengal-er Chele" (tr: Son of East Bengal) tanked... which goes on to prove that content is King. However, it did not affect the price of the much sought after Ilish maach one teeny-weeny bit though and the "Bangals" continued to savour Ilish maach-bhath/ Bhapa Ilish ar Jhar Jhare Sada bhaat/ Doi Shorshe Ilish/ Ilish mach-er Matha/ Ilish mach-er Dim Bhaja, et al without a care in the world. Wonder why the keuketa (who's who) of Bangla cinema decided to stop making such great films and opted to become the cheap cousin of Bollywood instead. What a pity.

However, I read that off late some amends are being made and the recent "Bangal Ghoti Phataphati" with a stellar cast comprising of current heartthrobs Jishu Sengupta and Koel Mullick, the Bengali theater and cinema legend Manoj Mitra, veteran actor and funny man Chinmoy Roy, Kanchan Mullick, the versatile Sabyasachi Chakraborty, Sabitri Chattopadhyay, Madhabi Mukherjee, Subhasish Mukhopadhyay, Biplab Chattopadhyay, Rita Koyral, among others is pretty decent.

More often than not these pet names or nicknames can and have outshined the Bhalo Naam... forever.
Without them, Gauranga Chakraborty and Alokesh Lahiri would never have become Mithun(da) and Bappi(da) respectively. And Mahakshay Chakraborty too wouldn't have been 'famous' as Mimoh Chakraborty. What? Does Abhas Kumar Ganguly, Prabodh Chandra Dey or Nilanjana Lahiri ring any bell unless I tell you that those are the bhalo naam(s) of Kishore Kumar, Manna Dey and Jhumpa Lahiri respectively?

Have you ever wondered what would have happened to the following iconic characters without their nicknames/pet names: 'Feluda' (Pradosh Chandro Mitter), 'Ghanada' (Ghanashyam Das), 'Tenida' (Bhojohori Mukherjee), 'Kyabla' (Kushal Mitra), 'Pyalaram' (Kamalesh Banerji) and 'Habul' (Swarnendu Sen)? Even 'Bantulda' and 'Keltuda'? What would have happened to the delightful pairs of 'Handa-Bhonda' and 'Nonte-Phonte' - if they were to be 'blessed' with a bhaalo naam?

The answer would be a collective "Shobbonash" (actual: Shorbonash, meaning 'utter disaster'). So, Thank god for small mercies!
Even 'Dada' has outshone Sourav Ganguly and 'Didi' is more endearing than the quite a mouthful Mamata Banerjee. No?
The intelligent and intellectual (aantel) Bengali is quite aware of current affairs, sports, new discoveries, technological advances and general knowledge… and all of that manifests itself in the names - bhaalo naam and daak naam included. Especially for their beloved offspring and an assortment of equally beloved nephews-nieces (Bhaipo-Bhaijhi[s], Bonpo-Bonjhi[s] and Bhagne-Bhagni[s]). Plus the numerous offspring of para-protibeshis and shohokormis, and friends of neighbours and colleagues. That way an average Bengali is more than charitable, you see. The result: babies and tiny tots answering to names like - Rocket, Biman (aeroplane), Faraday (the famous physicist) and Gama (the famous wrestler - The Great Gama - aka Pehelwan Gama/ Palowan Gama in Bengali). And of course Zico and Pele - after the two Brazilian magicians of the beautiful game.
Here are some of the most common daak naams from an earlier era: Potla, Poltu, Bhombol, Bhomla, Pocha, Panchu, Kanchu, Habul, Ghoton, etc - for boys and Tempi, Puchki, Tuni, Buni, Bunchki, Bunchi - for girls. Times have changed... and now-a-days they mostly sound like they have been imported. Sample this: Sonia, Sania, Rhea, Sana, Zinea - for girls and Mark, Neil, Ian, Ryan, Aryan, Pinto, Rocky, Remo, Vivan, Jason, etc - for boys. I am not sure about the export bit though.
(More later...)
Photograph: The one and only Tenida. Pic. courtesy: facebook.
Posted by Roshmi Sinha at 9:50 PM