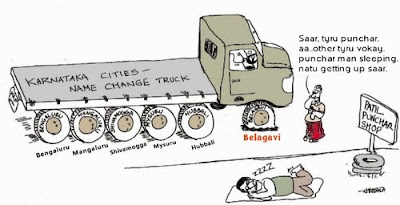 The origin of a city's name and its antiquity is of special interest to historians. Infact the name of any city and the changes in it or even its colloquialization have always fascinated people, and "Bangalore" indeed has caught the interest of many. Folklores, guesses, historical evidences, and inscriptions are quoted to prove different theories of the origin of the name "Bangalore".

The joke goes like this... that namma "Bangalore" derives it name from the over 4 lakh Bengalis who reside here. If you delete the last 3 alphabets from "Bangalore" or from "Bengaluru" you are left with "Bangal" or "Bengal". Right?! Even though "Bengaluru"... the new name for Bangalore City is yet to be confirmed by the central government.

Anytime soon, "Bangalore" is expected to be officially christened "Bengaluru'. But the issue is now stuck with the Union Home Ministry. And the famed and formidable web of "red tape" woven by the even more formidable Babus.

The name "Bengaluru", though, appears to be catching up fast, with several major corporate houses and television channels adopting the new name. The official nod for the change in name has, however, not been given yet. Also, the confusion over how to spell the new name ("Bengalooru" or "Bengaluru") still prevails. Had the great bard William Shakespeare lived in these times... he would have never written the following lines for his play (Romeo and Juliet [II, ii, 1-2]):

"What's in a name? That which we call a rose

By any other name would smell as sweet."

The Centre reportedly has no objection to permitting the change of 12 of the 13 names sent across by the Karnataka government: Bangalore as Bengaluru; Mangalore as Mangaluru; Bellary as Ballari; Bijapur as Vijayapura; Chikmagalur as Chikkamagaluru; Gulbarga as Kalburagi; Mysore as Mysuru; Hospet as Hosapete; Shimoga as Shivamogga; Hubli as Hubbali; Tumkur as Tumakuru and Kaup as Kapu.

Although a small town along the west coast, the name change of "Kaup" as "Kapu" was sought much earlier and has been pending with the Centre for years. But nobody seems to have spared a thought for the delectable 'Mysore Pak'. 'Mysuru Pak' just does not sound delectable enough. What...??

The objection only pertains to Belgaum as Belagavi, but Karnataka has categorically told the Centre that it would like to affect all the 13 changes at one go. If the State gives in to the objections (unofficial) raised by the Home Ministry, it could be read as neglect of Belgaum, and that would be construed as politically insensitive. It could also be seen as neglecting Belgaum's interest. Kannada protagonists (including the activists of the "Kannada Rakshana Vedike" aka KRV and the "Akhila Karnataka Gadi Horata Samiti"... an umbrella organization of about 200 pro-Kannada organizations... whose sole aim is the "protection of the state's borders") have said the name change should first start with Belgaum since Belagavi is closer to Kannada than Belgaum. As former Union Home Minister Shivraj Patil hailed from Maharashtra, he was under pressure from his home turf for rejecting this proposal. The current incumbent - PC - is busy rebooting. The "Master Plaster" and his family too have invited themselves to this "naming ceremony". Add to this the 'Kar-nataka' brand of jataka tales with the cheap minister busy prostrating himself in front of assorted Gods and Goddesses - mortal and celestial. So the name change is now entangled in political twirl.

From Boiled Beans to Bangalore to Bengaluru: Among the metropolises in India, Bangalore is next to Delhi in antiquity.

An interesting peek into history reveals the evolution of the name "Bangalore". An apocryphal yet popular anecdote recounts that the 11th-century Hoysala king Veera Ballala II (1173 - 1220 CE), while on a hunting expedition, lost his way in the forest. Tired and hungry, he came across a poor old woman who offered him shelter for the night and served him some boiled beans and water, as was the custom in rural areas. The grateful king named the place "benda-kaala-ooru" or "Benda Kalooru" (literally, "town of boiled beans"), which eventually evolved into "Bengalūru".

Another story tells us how "Venkataru" (because of the many Venkataramana Swamy temples built by Kempe Gowda) became "Benkaturu" and finally "Bengaluru". Yet another tale talks of "Benacha kalluru" ("Benachu" is quartz stone found in plenty in this area) becoming "Bengaluru". Another theory traces the name to "Benge/Benga trees" or "Ven-kai" (also known as the Indian Kino Tree... Pterocarpus marsupium) found in "Bengeuru", which became "Bengaluru".

"Bangalore" also had other names such as "Devarayapattana" (16th Century) and "Kalyanapura"/"Mangalapura". However, the word "Bengaluru" first appeared in an inscription of 890 A.D. found in Begur, about 10 miles south of Bangalore. Historians believe that Bengaluru mentioned in the inscription may be different from the Bengaluru near Kodigehalli near Hebbal. It may be noted here that Bengaluru near Kodigehalli was the parental house of Kempe Gowda's mother as well as of his wife. This must have prompted him to name his city as Bengaluru.

The Gangas ruled Gangavadi from Kolar starting c. 350 and later shifted their capital to Talakadu. Their rule often extended over large parts of Tamil Nadu. The earliest reference to the name Bengaluru was found in a ninth century Western Ganga Dynasty stone inscription on a "vīra gallu" (literally, "hero stone", a rock edict extolling the virtues of a warrior). In this inscription found in Begur, Bengaluru is referred to as a place in which a battle was fought in 890 AD. It states that the place was part of the Ganga kingdom until 1004 and was known as "Bengaval-uru", the "City of Guards" in Halegannada (old Kannada). Apparently, around 5th Century, the Ganga rulers constructed a hamlet near Kengeri for their security guards - known as "Bengavalu" in Kannada. Their dwelling place was popularly known as "Bengavaluru", which later on seems to have changed to "Bengaluru".

An inscription, dating back to 890 CE, shows Bangalore is over 1,000 years old. But it stands neglected at the Parvathi Nageshwara Temple in Begur near the city. Written in Hale Kannada (Ancient Kannada) of the 9th century CE, the epigraph refers to a Bengaluru war in 890 in which Buttanachetty, a servant of Nagatta, died. Though this has been recorded by historian R. Narasimhachar in his Epigraphia of Carnatica (Vol. 10 supplementary), no efforts have been made to preserve it. The inscription stone found near Begur reveals, that the district was part of the Ganga kingdom ruled from Gangavadi until 1024 C.E and was known as "Benga-val-oru", the "City of Guards" in old Kannada. In 1024 C.E, the Chola Empire captured the city. Today, little evidence can be seen of this period. A small village in south Bengalooru and one in Anantapur district bear the Chola name but the residents are of native stock. The later Gangas often fought alongside the Chalukyas, Rastrakutas and the Hoysalas. In 1117 C.E, the Hoysala king Veera Ballala II defeated the Cholas in the battle of Talakad which lead to the downfall of the Chola empire.

There is an inscription dated 1628 C.E in the Ranganatha Temple in Telugu. The English translation of which is: "Be it well, When Rajadhi-Raja-Parameshwara Vira Pratapa Vira-Maha-Deva Maharaya seated in the Jewel throne was ruling the empire of the world: When of the Asannavakula, the Yelahanka Nadu Prabhu Kempanacharya-Gauni's grandson Kempe Gowda's son, Immadi Kempegaunayya was ruling a peaceful kingdom in righteousness with the decline of the Vijayanagar empire, the eclipse of the rule of Yelahanka Nadu Prabhus took place at the dawn of the 17th century."

Bangalore was the capital of Yelahankanadu Prabhu's for 101 years from 1537 to 1638 A.D. Kempe Gowda I or Hiriya Kempe Gowda (c 1513-1569, c 1510-1570 AD) was a great visionary, a builder, and an enthusiastic and energetic ruler. He subdued the warring neighbourly chieftains and brought in prosperity and peace to the people. After 32 years of his rule, his son Gidde Gowda ruled for 15 years from 1570 to 1585. Thereafter, Kempe Gowda II ruled for 48 years (from 1585 to 1633), and like his grandfather, he was a brave soldier and a great builder. He is known for many constructions like the Ranganathaswamy temple in Balepet, forts in Magadi and Savanadurga and tanks including the Kempapura and Karanjikere tanks. The watch-towers in Lalbagh, Kempambudhi tank, Halasur tank (near Ulsoor lake), and near Mekhri circle have become famous as Kempe Gowda towers... that marked Bengalore's boundary. The watch- tower is now the insignia of the Bangalore City Corporation.

Therefore origin of Bangalore is clearly marked by the ceremony of furrowing the main streets by Kempe Gowda I in 1537 A.D. This can also be assumed as the commencement of its political history. However, there was human habitation much earlier around the place now known as Bangalore. Stone Age weapons belonging to 2000 to 1000 B.C. have been found near Jalahalli, Siddapur, and Gavipura. Iron Age relics of about 800 B.C. have been found in Kannur, Jadigenahalli, Koramangla, and other places. Roman coins of Augustus, Tibirius, Cadius, and Caligula of about 1st Century A.D. have been unearthed from Yeshwantapur and HAL areas. Inscriptions and historical evidences belonging to various periods - Talakadu Gangas (2nd to 10th Century A.D.), Cholas (1004-1116 A.D.), Hoysalas (1116-1336 A.D.), and Vijayanagar Kings (1336 A.D. onwards) - show that several dynasties ruled over this area. In addition, many veeragals (hero stones) have been found in various places of Bangalore. Hero stones found in Lalbagh and Kengeri (10th Century), lake in Krishnarajapura (11th Century), near Railway Housing Colony (13th Century), and near the band-stand in Lalbagh Glass House (13th Century) clearly show that the area was well inhabited and well settled.

Note: The views expressed here are entirely in good humour and without malice.

Hilarious take on the topic of this post. Apt... right?!! Pic courtesy: Link.