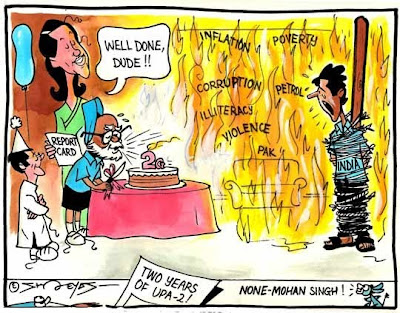 In the 80's it was Ek Duuje Ke Liye. Now Kamal Haasan and Rati Agnihotri have moved into middle age and cannot dance around trees. Oh fish! But we have a bigger and better alternative! So, don't you be pensive. Errr... how big? 1.76 lakh crores and counting! Bounty hunting!

It is time to Ek 2G ke liye. Starring Raja and Kani. Where's the money, honey?

The cast also includes sundry Dee Yem Kay family members. With a tearjerker performance put up by the family patriarch! As for the rival arch... Amma dekh, ah dekh tera... errr whatever... bigda jaaye. I said Amma... and not Mamma Mia. Mind it!

Tihar jail. Dabur Amla Kesh Tail. Both give you: Ghane Mulayam Kaale Baal, Khile Khile Matwale Baal. How? Arre kesh tail hai re baba! As for the former... no Biran Kedi! That makes for a comfortable stay. And while the sun shines make hay. The aam-jaanta will continue to go to the Temple, Church, etc and bray.

Raja has gone to Tihar with band baaja baaraat. Kya baat? Arre... he has finally got the qualification that was missing in his Résumé. Which one? Tan tana tan. Time spent in jail. Otherwise a Neta is an epic fail. No national stature you see. Even though one may be very bisi.

Poor Kani. Perhaps had to be the fall guy errr gal... for papa dearest. While he says that a conspiracy has been hatched against him and the K family from Kanyakumari to Mt. Everest. So, conspiracy has now scaled Mt. Everest too! Boo Hoo! But we also thought it had scaled Mt. Azhagiri too. What say you?

The younger Mr. Clean is wondering 2G or not 2G. Whatever will be will be. But then he doesn't need Dabur Amla Kesh Tail, you see. His crowning glory is nature's bounty!

Now, Kani is Azhagiri's half-sister. Which half... may I ask? And pray... what about the other half?

Malanidhi Karan, Mr. K's nephew, is producing movies. While Sdayanidhi Utalin, Mr. Clean's son, is currently seen as the producer with the Midas touch. Sach! But Robot has taken off to Singapore. Enna Rascala, I see you.

Ilayathalapathy Bijoy has noticed the winds of change... and gone over to Amma. Clever, I say! Now, Lady Luck aka Amma will be smiling on him and his movies. Heebie-jeebies. Enna Rascala? Ab tera kya hoga Shankara? Amma will take on Robot. Waiting for Godot.

Bijayakanth aka Captain is waiting to join forces with Amma. Bijayakanth who? Arre baba, he is the poor man's Rojonikanth. And is the Neta of Dee Yem Dee Kay. Or so they say.

And if Amma comes can Chinnamma be far behind?

Mr. K and Mr. Goody Two Shoes. Have their goose been cooked? Wait and see. Meanwhile... Spectrum changed the equations. Mamma and Amma will have to work together and be thick friends. Smile for the cameras with flower bouquets in hand. How grand!

Pochishe Boishakh - the 25th day of the month of Boishakh passed us by about 5 days ago. It ushered in the 150th birth anniversary of the poet laureate and versatile genius Gurudev Rabindranath Thakur. Fondly referred to as "Robi Thakur" and "Kobiguru" and even though his name has been anglicized as Rabindranath Tagore, he lives on in our hearts, through his rich legacy of work... which also includes his timeless songs - Rabindra Sangeet.
Here are some links to a few of those songs that are also brilliant poetry. Sit back and immerse yourself in the fragrance of his words, thoughts and music:
1. Akash Bhora Surjo Taara: Link - sung by none other than Srikanto Acharya.
2. Aguner Poroshmoni: Link1 - by Srikanta Acharya.
3. Aloker Ei Jhorna Dhaaraye Bohiye Dao: Link2 - rendered by Bhaskar Bagchi.
4. Mone Ki Dwidha Rekhe Gele Chole: Link3 - sung by Chinmoy Chottapadhyay.
5. Aamaro Porano Jaha Chaye: Link4 - by Chinmoy Chottapadhyay.
In Hindi: Hindiversion.
6. Aami Chini Go Chini Tomaare (from the movie "Charulata"): Link5 - Sung by Kishore Kumar. Lyrics: Kobiguru Rabindranath Thakur, Direction: Satyajit Ray, Actors: Soumitra Chatterjee and Madhabi Mukherjee.
Note: "Nashtanir", translated as "The Broken Nest" or "The Fowled Nest". The great Satyajit Ray has captured it on screen as "Charulata". Ray's translation of "Nashtanir" into the film "Charulata", completed in 1964 and released in 1965.
It is thought to be autobiographical. Amol's character (played by Soumitra Chatterjee) is Tagore himself and Charulata (played by Madhabi Mukherjee) is his sister-in-law Kadambari Devi (the wife of Jyotirindranath Tagore). Jyotirindranath was one of Rabindranath's elder brothers and 13 years his senior. Rabindranath was the fourteenth and the youngest living child of his parents. Kadambari Devi was married at the age of nine and committed suicide at 26 (4 months after Rabindranath Tagore was married). Rabindranath was 22 at the time, just a couple of week shy of his 23rd birthday. It is said that Robi Thakur never recovered from this shock...
Watch "Charulata" if you can.
7. Tumi Robe Nirobe (from the movie "Kuheli"): Link6 - sung by Hemanta Mukherjee and Lata Mangeshkar.
8. Aami Poth Bhola Ek Pothik Eshechhi (from the movie "Mon Niye"): Link7 - sung by Hemanta Mukherjee and Asha Bhonsle.
9. Tumi Kemon Kore Gaan Karo He Guni: Link8 - rabindra sangeet by Srikanto Acharya (along with English Subtitles).
10. Chanchalo Mon Aanmona Hoye (from the film "Adwitiya"): Link9 - Lata Mangeshkar and Hemanta Kumar are the playback singers.
11. Kon Se Alor Swapno Niye (from the movie "Prothom Kodom Phool"): Link10 - Lata Mangeshkar.
Here is the version sung by Shreya Ghosal: Link-Shreya.
12. Ke Pratham Kachey Esechee (from the film "Sankhabela"): Link11 - Manna Dey and Lata Mangeshkar.
In 1966, Sudhin Dasgupta used Manna Dey to playback for Uttam Kumar for the first time in this movie… that starred Uttam Kumar and Madhabi Mukherjee.
13. Aaj Mon Cheyeche Ami Hariye Jabo (from the film "Sankhabela"): Link12 - by Lata Mangeshkar.
14. Chander Haasi Bhaand Bhengechey: Link13 - a beautiful song rendered by Indranil Sen and Indrani Sen.
15. Prano Bhariye: Link14 - Nayontara.
16. Sokhi Bhabona Kahare Bole: Link15 - by Lata Mangeshkar.
... His legacy, our treasure-trove is overflowing with such gems.
He Kobiguru... tomar paaye thhaekai matha. He Bishwakobi, He Robi Thakur, amar matha noto kore dao he tomar chorono dhular tole. Tumi dhonno Robi Thakur, tumi dhrubotara, tumi amar... tomaye pronam. Shato koti pronam.
Photograph: Robi Thakur with two of his kids. Pic. courtesy link.
Posted by Roshmi Sinha at 12:21 PM 4 comments:

The sauce always justifies the means! 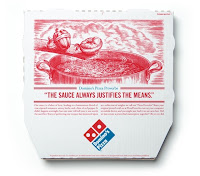