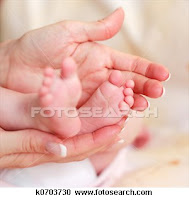 Hello everybody!!! I'm back... and intend to be as 'regular' as possible with my posts... going forward. Which means... being 'regularly irregular' or 'irregularly regular'. Yet again. *wink wink* Let me also apologise for taking yet another unscheduled/unannounced 'extended vacation' from bloggersville. Again. *more winks*

I'll let out the secret... which prompted all these 'extended breaks'. Our li'l bundle of joy has arrived... and we're thrilled to say the least *a big smile*

He is just a few days 'old'. Or should I say 'young'... ?? Hehehe! He hasn't been officially named as yet... for now he is simply 'baby shona' to all of us. 'Shona' in Bengali/Bangla means 'gold'. So... 'baby shona' means 'golden baby' or 'precious baby' or 'priceless treasure'. All rolled into one!

Frankly... I fall short of words to describe what I feel everytime I look at my baby or hold him in my arms. He is such a cutie pie... and everyone says he looks just like moi... !!! Mamma Mia! (For the uninitiated... "Mamma Mia" is an expression Italians use, literally meaning "My Mother"... and it is an interjection denoting various kinds of emotions: surprise, anguish, fear, rejection, joy. Essentially it is an Italian exclamation meaning "Oh my God " or "My gosh!" or "Good heavens!") Here... there is no 'Italian connection' though *wink wink* He isn't a 'cry-baby' or should I say a 'high-need baby' either... and cries only when he is hungry or needs a diaper change. Or when he is being given a bath... by Ma (his granny and my best half's mom). The moment he begins to feed, or is cleaned up and put on a fresh diaper or finishes his bath... he stops. He even cries in style - Sur mein! And goes... 'la-la-la-la-la' or 'ga-ga-ga-ga-ga'...!! And I love to watch him sleep... and melt totally... everytime he smiles, tries to reach out for me or wraps his little fingers around mine. I gaze at his tiny fists with their little fingers and his tiny little feet... so small and so beautiful... and pink-hued. I kiss those tiny fingers and toes. They remind me of all the baby movements... the soft kicks and mild punches - I felt inside me... all these months. It is a feeling difficult... nay impossible to put down in words. All expectant mothers will nod their heads in agreement... I'm sure!

That all went well... I'm relieved to say the least... and have God and my doc to thank for that. Especially since just over 5 months before our li'l son was born I underwent a myomectomy. This was after the end of the 1st trimester. When I learnt... I was in the family way... I found out about the existence of the (totally unwelcome and unwanted) tumour. Grrrrr! And I didn't know how to react. Then there was the little business of 'resuturing'... since half the sutures/stitches had gaped... shortly after the surgery. The 2nd trimester was uneventful and I was cruising through my 3rd trimester as well. Then came the nasty surprise... when I had just entered into the 9th month. My 'pedal edema' which was mild from the onset of the 3rd trimester... suddenly decided to make its presence felt. But thats not all. During one of my regular bi-weekly check ups... my B.P. (blood pressure) played truant and decided to scale Mt. Everest without my knowledge and/or permission. Hmmph! It read 200/110... !!! All throughout my pregnancy it had behaved itself and remained at 120/80. I had never had B.P. issues ever in my life... and to say I was shocked would be the understatement of the millennium. My doc... who is normally very cool... and goes about her job (performing surgeries, etc) like she was taking a walk in the park, or having a coffee break or as if she was on a sightseeing trip and visiting the Taj Mahal or the Mysore Palace... was shocked too... and asked me to get admitted. Pronto.

My best half and me had plans of having lunch together, dropping in at Crossword (the book shop) to pick up some DVDs, then going over to one of the baby shops for the baby cradle... before heading home... had to cancel all that and rush home. Infact, just a couple of days earlier... we had bought most of the baby stuffs... without an inkling of what was in store 2 days later. My mind was numb and I was thinking of all kinds of unrelated stuffs including Satyajit Ray's "Goopy Gayen Bagha Bayen" and "Joy Baba Felunath"... on the way back! Once there... it took me a while to calm myself down, then I had lunch, packed whatever we needed for surviving our hospital stay and then had a cold shower. That soothed my nerves and by the time we reached the hospital... I was fine and confident enough.

Come to think of it... we were planning to catch William Wyler's delightful "Roman Holiday" on DVD... and ended up going to the hospital, getting admitted and having a baby... a day later!!! Strange are the ways of God! But then... "Roman Holiday" is a reverse fairytale... and so was ours! We did manage to watch this enchanting romantic comedy though... some 15 days after my discharge.

At the hospital... my medical records (of the myomectomy) and the latest scan reports were checked... then I was put through a series of tests and check ups (B.P., pulse, temperature, NST - thats the baby's heart beat monitor - while I was counting the baby movements; blood and urine tests). Phew!

Before all that... as soon as I entered the 'Delivery Room' (in the Maternity Ward) I heard the agonising cries and shrieks of a woman... undergoing labour pain. I was thanking my stars... that I was to undergo a C-section (Caesarean section). I had never heard these cries in real life... and reel-life - courtesy Bollywood (?)... well never mind! To quote an old saying (courtesy Kipling and suitably customized for this post/occasion)... 'Oh, Reel is Reel, and Real is Real... and never the twain shall meet!'

I was put on medication to control/bring down my B.P... but it remained as stubborn as a horse and stayed put on Mt. Everest! Double Grrrrr! The nurses monitored it throughout the night (every 2-3 hours) and took an urine test to check for the presence of albumin. It always read 1+ (no albumin indicate normal B.P.; traces indicate a rise in the B.P. levels that was not alarming... while 1+ meant just the opposite). I was not feeling any symptoms of high blood pressure viz. head ache, dizziness, giddiness, blackouts, etc. None at all. Infact... the high B.P. was not due to anything I was doing or not doing... but due to things beyond my control: placental changes, baby's weight, etc. The doc arrived early in the morning the following day (around 6 or 7 am) - she had a patient going into labour - and checked on me. No change.

Then around 11.30 am I was called (to the 'Delivery Room') for yet another urine test and NST. When I entered... I was surprised to find... it looked kinda deserted. Actually I was sitting just outside the 'labour room'... thinking that the nurses may have stepped out for a quick coffee break or a late breakfast/early lunch! Then I heard my doc's voice. She was saying: "push, push, keep pushing" to her patient in the 'labour room'! I had no idea that a delivery (that too a normal one) was taking place so close to me. It was so quiet... I could hear the sound of the fans! Some say that is the best sound to fall asleep to. Not sure about that though. While undergoing the NST and counting my baby's movements, I heard the cry of a newborn baby!

Once the NST was done... the nurse checked the reading... and my doc met me... after checking the reading of course. The reading was fine... but my B.P. was not. Multiple Grrrrr! Then she explained to me (not that I needed any explaining) what could happen if we delay any further: I could suffer a heart attack (cardiac arrest) or a stroke or a haemorrhage... it could affect the baby as well. In short... it could be life-threatening for both of us. She then asked me... if I was prepared to undergo the surgery... the following morning @ 10.30 am. I just told her that I would go with her judgement/decision. I trusted her totally. She also asked me if I had any alternative time in mind... I said no. I had no idea that my baby was arriving early... in the first place... !!!

First the high B.P., followed by the hospitalization, then to be told that I needed to be prepared for a C-section and the baby... it all happened so quickly... I was finding it difficult to believe it was happening in real time. Preparing for a surgery and a baby... at such a short notice... is easier said than done. Believe me. This is truly 'Jet Age'!

I got back to my room and informed M that he was to become a father the following day. He was surprised... and so were everyone at home. I called my friends as well... one of them - Lakshmi - had herself undergone a C-section a couple of years ago... and gave me some very useful advice/tips. Friends are amazing! Touché.