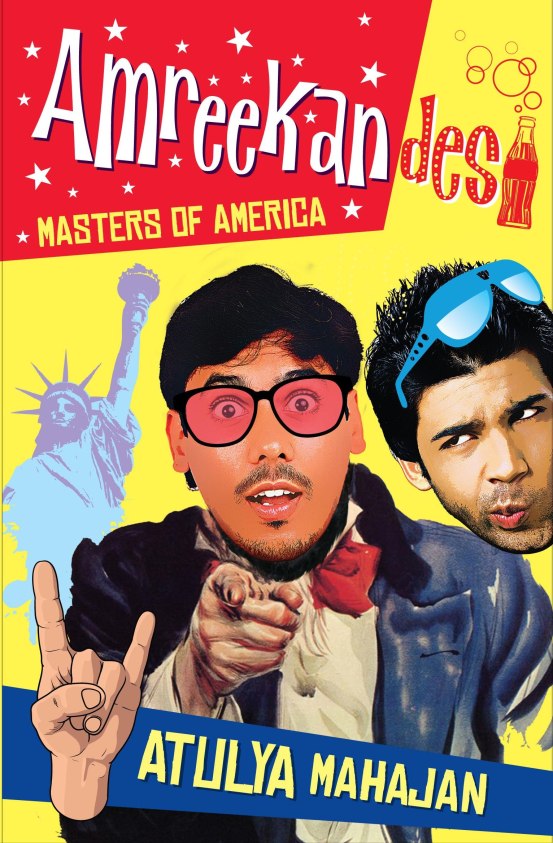 Atulya Mahajan's debut novel Amreekandesi: Master's Of America is a decent one-time fun read. Choc-a-bloc with all the clichés one can think of about a middle-class Indian boy's journey to the "land of opportunity"... and subsequent events, complete with all the troubles, travails, struggles, disorientation, lifestyle changes, reality checks, road trips, matters of the heart, Indian English and an alien education system. The author covers almost every aspect of a desi student's life in the US of A: right from reading Barron's GRE guides, running around institutes for GRE coaching, using new words and American lingo (in everyday conversations), applying to colleges, getting recommendation letters, visa interviews, tickets, packing (to accommodate an assortment of desi snacks, masala, et al); bidding farewell to friends, withstanding endless advises from family, friends and the much-revered neighbourhood uncle (whose high-achieving-greatly-admired son already resides in the hallowed land; uncle isn't too pleased though, to share that halo henceforth). There's also the subdued drive to the airport (luggage bursting at the seams in tow), emotional farewell, take-off from Indian shores, connecting flights, foreign airports, landing in an alien land, Indian community @ campus, helpful seniors, new desi friends, classes, assignments, academic rigour, hard work, superior facilities, stern but compassionate professor, desi food ... graduation day ceremony - Mahajan has pretty much covered all facets of a desi student's life in the US.

Not surprising, since the author himself has 'been there, done that'.

In Amreeka there are no roadside vendors selling cut fruits, coconut slices or assorted papads. There are no beggars either, and homeless persons did not appreciate a plate of rajma chawal and kheer. And yes, there's the bit about FOBs (Fresh off the Boat) and ABCDs (second generation Indian Americans, derided as 'American-Born Confused Desi'). There's a smattering of Indian English too: what's your 'good name'? Myself so-and-so. 'I will give you a ring tomorrow,' and the like.

The story revolves around two boys who dream to fly off to America for a better future. Akhil Arora, an engineer from Delhi. Jaspreet Singh (aka Jassi aka Jazz) from a small town in the Punjab. Both get to live their dream in Florida State University (FSU). They become friends and share an apartment with Kedar (a Math major). The trio gel well and call themselves The MSketeers. Kedar, being the joker, always clowns around and cracks jokes. Their other desi friends are Sundar, Venkat, Dilpreet and Ruksh - who go out of their way to help the newcomers settle in. Sundar even lays out a delicious dinner for a tired and jet-lagged Akhil and his dad, courtesy ready-to-eat frozen food: parantha with saag paneer (which so revives Akhil's spirits that he takes to it like Popeye to spinach.)

They shop for grocery, cook, host parties and get-togethers, visit beaches and Disneyland, celebrate festivals with fellow Indian students, and like every Indian fresh out of India, they convert everything into rupees (... and end up goggle-eyed and wobbly-kneed.) Of course, they gradually learn to just roll their eyes and move on. They are also pleasantly surprised on being handed back the precise balance amount... instead of Cadbury éclairs candy.

During Lakshmi Puja - since none of them (neither Akhil nor any of his friends, that is) know the entire Lakshmi Aarti by heart, they perform the puja with the 20-odd Indian heads bowed in reverence as Anoop Jalota sings praises of Goddess Lakshmi on YouTube. After prasad (halwa), the most important thing (that everybody was waiting for) is laid out: food. 'For the next one hour, everybody ate, and ate some more. Dilpreet handed out Hajmolas at the end.'

They make it to Subway, ask for vegetarian options, and are given two choices: Veggie Patty or Veggie Delite. And since the word 'delight' sounded better, they promptly opt for the latter. Thereafter they come across a whole bunch of bread in fancy sounding names: whole wheat, parmesan oregano, etc. And since they also want capsicum with their Veggie Delite, they try their bestest to communicate it (Capsicum. Cap-see-cum?) ... Only to be told it was bell pepper.

During their infrequent road trips they stay in Potels (Patel owned Motels). And are fascinated by how a hard-working, entrepreneurial community had achieved its American dream by providing Americans comfortable places to dream. Along the way they also discover quaint little Indian restaurants... and immediately get busy with the sumptuous spread on offer: chicken tikka, paneer butter masala, dal makhani, and gulab jamun (for dessert). Only Ruksh looks on wistfully at the chicken tikka - tuesday vrat coming in the way.

They get-together with other friends and chat over a delicious meal of rajma chawal, egg curry and frozen paranthas. For someone who had not cooked even a simple dal in India, Akhil gradually learns to whip up full meals, while Jassi prides himself on his ability to make Maggi noodles and boiled eggs without burning them. They also discover there's no aloo-tikki burger in America, but hunger pangs compel a vegetarian Akhil into eating chicken sandwiches (and since 'it tasted like paneer,' he finishes it off in a couple of minutes.)

They make some American friends too and learn about the latter's experiences in India. Jassi goes to watch his first football game (an inter-university game) with Nigel and some others - American football, not the one Indians knew. That was soccer.

Akhil is a decent, sincere and studious chap, sometimes homesick. He is determined to prove himself and make his parents happy ('coz with FSU not being in the top 100 US universities, they are worried about his future.) He plans to return to India after a few years, and eventually falls in love with Nandita - a fellow FSU student he had met on the flight to America.

Jassi, on the other hand, is the cool dude (or at least that is what he thinks of himself). He wishes to live the American dream, a la the movie "American Pie". He is embarrassed by his Indian identity and so, plans to look for an American girl... and settle down in Amreeka. Jassi, unlike Akhil, has no intentions of returning to his country, ever. His character is essentially that of an average Joe... dreaming of bikini-clad girls, beaches and Pamela-ji (in no particular order, though.) However, a few of the incidents involving him are somewhat over-the-top.

But here's a funny one:

"'Hi Victoria,' he finally managed.
'Whoa there. Looks like somebody's working hard to get rid of the love handles.'
'Love handles?' Jassi's ears stood at alert at the mention of love.
She laughed loudly. 'Oh, these.' She grabbed a tire of fat on Jassi's side.
She touched him, and Jassi knew that he was back in business. In his mind, there was no doubt that Victoria was definitely interested in him."

There's also the desi tadka offered by Akhil's dad who addresses Mindy as "Miss Bhindi" - to register his pique, attempts to haggle, turns up at a popular convenience store (managed by desis) armed with notepad and pen... all in a bid to prove how much they overcharge. He also eyes Akhils's new friends with nervous suspicion... imagining his precious son turning into a drug addict dancing to dum maaro dum on the streets of America, while wearing yellow coloured bell-bottom pants and shirts with red and orange floral patterns. On their first visit to a famous Mexican fast food joint Mr. Gyaneshwar Arora takes one bite of his Burrito, puts it down and opens up the wrap. Then discovering it is 'just rajma wrapped in a lousy roti' (for which they have paid 5 dollars!), he chides Dilpreet for calling it 'Mexican food'. Dilpreet only manages to smile while wondering what he would say when he found out that Taco Bell also served kidney beans with rice: Rajma chawal. (No wonder some of his friends refer to Taco Bell as Taco Balle Balle, for its closeness to Punjabi tradition.)

Mr. Arora's character is enjoyable, while Goyal-ji and "Perry" are plain amusing.

My twopenceworth: Though Mahajan has included witty insights and humorous anecdotes while chronicling the experiences of an immigrant (including identity crises, trying to find their feet in a foreign land, attempts to live India away from India et al) - none of it can be called novel. However, given Mahajan's neat writing style, you end up enjoying the journey till the end. Very few editing errors, and that adds to the reading pleasure. The book jacket cover is quite funky.

But the book is a tad too long, at some places the story just drags on. Needlessly. Some sharp editing... to prune out these unnecessary and over-the-top bits would make it more crisp.

My rating: 3/5. Predictable, but a fun read nevertheless.

Don't expect a "Dil Chahta Hai" or a "3 Idiots" set in Amreeka. It's not in the genre of Nagesh Kukunoor's path-breaking "Hyderabad Blues" too. And it's not up there with Anurag Mathur's hugely popular "The Inscrutable Americans" either. The latter is a timeless polished read with intensity and depth, an unabashedly humourous take (tinged with pathos) on the travails of a simpleton, a small town Indian boy, who goes to the U.S. to pursue his higher studies... and is confronted with myriad culture shocks. This book has achieved cult status now. There's no comparison whatsoever.

About Atulya Mahajan: Atulya Mahajan is an Indian author and is the creator of the Indian satire blog amreekandesi.com. Professionally a technologist in an investment bank, Mahajan went to the US in 2004 to complete his Master's degree. He worked there for five years and then returned to India. He started this blog while studying in the US and used it as a platform to share his experiences of people living in a foreign land. Besides this blog, Mahajan also works with the Crest Edition of The Times of India as a columnist and writes occasional humor.

Picture: The book jacket cover of Amreekandesi: Master’s Of America. Courtesy: link.
Posted by Roshmi Sinha at 11:49 PM No comments: