If I Pretend I Am Sorry! Will You Pretend And Forgive Me? by Prashant Sharma 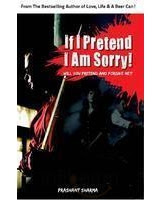