The Lost Story by Amit Goyal I Sudhanshu Gupta 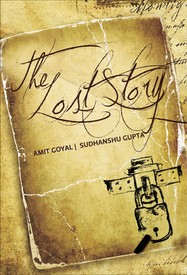 I love reading books, but have a problem with being called a voracious reader, since I do not think books can be dipped in tea.

But, when Amit wrote to me to check if I would be interested in reviewing their recently released book titled, 'The Lost Story' - what intrigued me was the experimental writing technique. One author starts a story but another finishes it with no prior hints or knowledge of what the former had written - until he was handed over the first half. While the second half was being written, the first author had no say or hint about where it was going - until it was done.

The Storyline: The celebrated, reclusive, Booker-winning Saleem Afzal hasn't written anything in 23 years. The young enthusiastic fan - Sandeep Gupta aka "Sandy" - wants to know why.

Starry-eyed, idolizing Saleem and wanting to follow in his footsteps, he sends a story to the long forgotten author - seeking his opinion.

What follows surprises him. Saleem not only reads the story but also agrees to collaborate with Sandy - for one final book - his last hurrah.

Sandy is predictably over the moon and goes to meet Saleem. What are his impressions about the man, the legend, his surroundings, and his home - well, you will have to read the book to find that out.

They meet intermittently, but keep in touch laptop-to-laptop. The reader gets a peek into Sandy's own life - his relationship with longtime girlfriend Tara. But as he delves deeper into the ocean - into the world of Saleem, their book, the locked door in Saleem's house and the lost story - his own world undergoes a sea change.

My Two Pence: The book contains multiple stories, of varied flavours and colours, all well paced, well done and neatly tied up - yet leaving enough room for the reader - to ponder and wonder about other possibilities. What may have been? What could have been? What should have been?

And that actually helps in stimulating one's gray cells and stopping them from graying prematurely, what?!

It is a book that makes for an interesting yet breezy read, that one can curl up with or sit upright in cabs with, or even fly among the clouds with.

The authors have an eye for detail. Every encounter, every twist and turn, the dialogues, the setting, is reasonably well done. And so are the names. Do read the book to get with I mean.

The language isn't convoluted, the plot is tightly woven and doesn't meander ... and that, coupled with the limpid writing style, makes 'The Lost Story' a pleasure to read.

The only thing that rankles is the numerous editing errors - which could and should have been easily pruned out. The production value of the book is good; it feels good to hold, apart from being light on the wallet too.

The book jacket cover is very well done indeed; it stands out and catches the eye - effortlessly. And as you know, for debutant authors: first impress-aan ij last impress-aan!

My rating: I will go with a 4/5 for Amit and Sudhanshu's maiden offering.

The ending is hatke. It again stimulates the gray cells and is sure to generate multiple and conflicting opinions, but then we are the world's largest demo-crazy. So, more the merrier!

This is a very successful joint venture indeed. As the French would say: très bon. There's no French toast, just that I watched 'An Evening in Paris' the other day and liked it too.

So, do get hold of this book and read all you can and then decide for yourself if you can figure out whether this is a joint venture or a merger :)

Photograph: The book jacket cover of 'The Lost Story'. Picture courtesy: link.
Posted by Roshmi Sinha at 4:30 PM No comments: