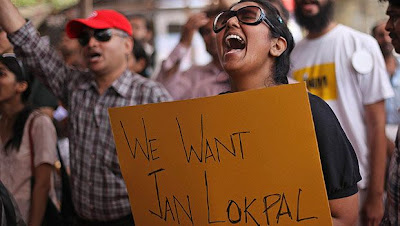 Author's note: This is my debut column for The Viewspaper – an online newspaper and India's largest youth paper.
Money wearing Black! Slack! Without bees or wasps - 'Corruption' - is the buzzword. Right you heard. What is - 'corruption'? Never out of fashion. Can we define it? No treat. Aakhir 'corruption' kis chidiya ka naam hai? What say?
Anna and Baba vow to eliminate it from society. Oh goody! Once and for all! That's tall. Is it doable? Double trouble. Will money leave the classic black and opt for the pristine white? Fight or flight.
Corruption = evasion of taxes. Culprits = the usual suspects. Netalog-policewallahs-businessmen! Ten on ten! Just like Baa, Bahoo aur Baby. But then all that fails to glitter can also be gold. Blow hot and cold.
"Maun-vrat' when injustice happens. 'Coz "silence is golden".
Violence, injustice @ homes, offices, marketplace, malls, public transports, roads. Already bored?
Teachers playing truant during exams! Have an egg with some jam. Better than traffic jam!
Doctors and bank employees following suit. Two hoot!
Transporters making their presence felt. Svelte!
Shenanigans of our men-in-black and of those who wield the microphone! Gone deaf stone?
Neglect and pull down achievers - as a society. Demo-crazy. It's the beauty of crab mentality!
"Chai-pani" to a peon, clerk, nurse, ward boy, waiter or coolie? Hilly Billy.
Paying hefty donations to 'book' a seat inengineering/medical/management institutes? Puss in Boots!
No tickets issued yet money changes hands. Sheer magic - sleight of hand!
When gender determination, infanticide and female foeticide happens? Two pence.
Of dowry and bride burning. No whining. India is shining.
Of rape and molestation - even by close relatives? Theory of relativity, silly! It's all in the jeans you see!
So, even babies, toddlers, the middle aged and the elderly also "asked for it"? You bet, they did!
Swayamvar ahoy! Cast(e) away.
I could go on and on and on.
If honey is kept on someone's tongue is it possible that s/he will not taste it? After all, why 'waste' it?
Chanakya – the Yugpurush (the timeless man) of Kaliyug - the age in which we live - warned against collecting taxes in large proportions. Governments should collect taxes like a honeybee - said he - which sucks just the right amount of honey from the flower so that both can survive.
There's much to learn from the birds, the bees and the flowers, G!
"One must know the nature of beast before trying to tame it," said the wise Mullah Nasruddin. To gain from his wisdom we should be keen.
Periodic brouhaha, TV debates = noise pollution. People with 'funds' should be induced to do something good for society. No hoity toity. No one-time grant. No rant.
Partner with remote villages and hamlets - build and maintain clean toilets for the residents and schools.
Build hospitals/health centers and sponsor the equipments, remuneration and medicines.
Provide fruits, milk and a boiled egg - daily - for the schoolchildren and nourishment for pregnant women.
"They" can do all this and more in their name or that of their forefathers'. The "costs" aren’t great but the benefits are. I swear!
Photograph: Participants at an 'anti-corruption rally' in India. Pic. courtesy link.
Posted by Roshmi Sinha at 12:51 PM 4 comments:

There is no greater reward than this :) 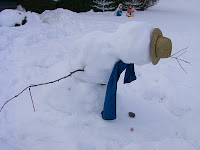 The greatest compliments are unexpected indeed.

A schoolteacher - Lekshmy - wrote the following lines after reading my review of "Ruskin Bond's Book of Nature":

Dear Roshmi Sinha,
This is an amazing review. I am a school teacher and I was wondering how to inspire my students to read more than their English textbooks. In my English class I read the lines from your review and showed it to them. They were pretty much excited. So I typed three short stories of Ruskin Bond and uploaded it in the school website. They all enjoyed it very much. Now they all are fans of Ruskin Bond. Thank you very much for inspiring my students. I wanted you to know that you were the key that unlocked the door of a wonderful world for eighty two students.
Lekshmy

Her note made my year! I felt humbled and enthused beyond words. It was wonderful to know that the magical mystique of Bond's beautiful words and the lilting charm of his prose have lost none of their appeal. And the children are indeed fortunate to have a teacher like Lekshmy. No?
However, I also felt that she shouldn't be thanking me. She should thank Ruskin Bond instead - for writing such charming stories filled with warmth, gentle humour, adventure and serene wisdom - and for bringing such joy to our lives.

Therefore, I have taken the liberty to share his address with them and hopefully they will write to him - soon. All his 82 young fans! Wouldn't that be super exciting!
As for the master storyteller - he really is a class act!
I am now reading his Roads to Mussoorie and will be reading Landour Days next.
Photograph: Pic courtesy: link.
Posted by Roshmi Sinha at 2:13 PM 10 comments: