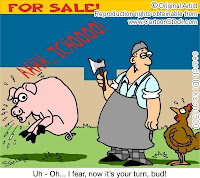 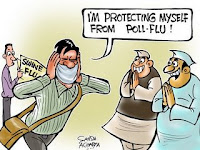 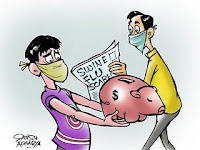 As we all know, every major incident... be it an event or an invention creates a ripple effect. These days, "Swine Fluuuuuu" is a hot topic... a p(b)ig ticket event... sweeping across this hapless planet, and leaving a trail of grunt(side) effects! And not just among humans.
Some 'possible' grunt(side) effects are listed below:
1. Fearing 'swine flu'... overanxious mothers, across the world, cutting off their daughter's pigtails. While most mothers in India making a beeline for Tirupati for the purpose. Talk about "two birds with one stone"... not any more. After the outbreak of "bird flu"... which preceded the "swine flu"... 'birds' too find themselves out of favour... even in phrases!
2. What do you do when a tall chappie a.k.a. bean pole occupies the seat right in front of you at the movie theatre/multiplex? "Elementary, my dear Watson." Just 'Cough' loudly... and then turn to the friend/partner/spouse sitting next to you and utter the words, "I must have that swine flu", just loud enough for that seemingly 'opaque object' obstructing your line-of-sight to 'overhear'!
3. Unable to book a movie ticket (?)... 'House Full'... No problem! Just 'Sneeze' and Viola! you will be the only one in the... (until recently) serpentine Q for those very tickets!
4. Taking the 'public transport' while travelling and no seats? Well, well, well, in no time you can have the entire bus/train/tram or whatever mode of public transport you were travelling in... completely to yourself. Just whip out your mobile... pretend to dial a number and say loud enough... with a tinge of alarm/worry in your voice that you are on your way to the hospital... to seek treatment for 'Swine Flu'... Just make sure that the driver of the vehicle does not put on the 'disappearing act' too!
5. Demand for 'Piggy banks' shoot through the roof: After the outbreak of 'swine flu'... banks, ATMs and all other modern contraptions deviced to park your money... safely (supposedly) have been made redundant. Thereby pushing the demand for the humble 'piggy banks' to the stratospheric level. These 'piggy banks' have been found to be burglar-proof, phishing-proof, pickpocket-proof... even the thieves and burglars subscribe to the "Health is Wealth" policy, you see! Last heard, the Swiss government has been complaining vehemently...
The Swiss had earlier approached the United Nations (UN) and registered their protest... but, the UN being a 'holy cow' itself, declined to take any action against a fellow 'fauna'...
6. Folks including little children are found to be moving around wearing masks and gloves... they are 'worried' about contracting 'swine flu' from their 'piggy banks'.
7. Extra care is to be taken while speaking... even while making small talk. If someone - a friend/neighbour/colleague/relative/acquaintance - asks a seemingly innocent question, "How are you?" A hurried "I am fine and you?" is most likely to be (mis)interpreted as, "I have swine flu." This will set the alarm bells ringing... and can even result in your job falling victim (to the 'swine flu') and 'flying away' on the wings of the 'pink slip'... !
8. Twitter/Facebook/Orkut and other social networking sites are 'insisting' that all their members reveal their 'true' identity.
9. There has been a marked decrease in the instances of riding 'piggy-back' which was (until recently) a very popular sport/activity... around the world.
10. "Beware of Dogs" signs outside homes are being replaced with "Beware of the Dog's Owner - he/she has 'Swine Flu'... Oink!"
11. The governments across the world have finally woken up and besides being busy... cutting and manufacturing red tapes... have announced the setting up of several factories to 'manufacture' flu proof piggy banks. Stringent quality standards will ensure that each one of them are fool... oops 'flu-proof'.
12. Security detail of VIPs and VVIPs (mostly self-styled) are undergoing a thorough overhaul... to make them 'flu-proof'.
13. The Williams sisters, Rafael Nadal and several other top class tennis players are in a fix... since 'grunting' has been banned during tennis matches. They now find themselves to be seriously constrained by the new law, which has prevented them from playing their 'natural' game.
14. Several reality shows are taking over the airwaves to cash in on the latest 'blockgrunter' in town... they want folks to 'grunt' their way to the top. The winners will receive gift vouchers from various pork manufacturing companies. These shows are sponsored by the major hospitals and health care centres in the country... who insist... by speaking with their p(f)ork tongues... that this gesture on their part will 'generate (be)awareness'.
15. There has been a record dip in the number of cases of "rabies" or "hydrophobia". The 'barking news' is that... in the recent 'Doggie Conference'... the resolution adopted has advised all dogs to steer clear of all 'humans' and 'swines'. Their Top dog, Mr. Bow Wow has issued a whip in this regard... and all dogs are to strictly adhere to the "Barking dogs seldom bite" rule. Since they do not have 'nine lives'... 'flying' is extremely injurious to doggie health.
16. While in the 'mouse community', they have unexpectedly discovered the perfect and flu-proof plan to 'bell the cat'... by putting up sign boards with the words, "Swine Flu" above their ratholes. This was stated by the Chief Spokesmouse Mr. Jerry. This plan is also likely to keep the 'moles' away and help them with getting on with their (No)kitty parties.
17. But, alarm bells are ringing in the 'chicken community'. According to the Chief Spokeschicken Ms. Cluck, they fear that this "swinenomena" or "swineflumania" will come full circle and hence the 'chicken community' are bracing themselves for another bout of (reluctant) 'flying'.

But, one 'particular' breed of living beings who closely resemble the "Homo sapiens" have missed this great opportunity. This breed is 'renowned' for never missing even half an opportunity... !
This breed - the 'pollt(r)icians' - especially those found in India - have missed out on the 'historic' nay 'epic' linkage between the 'swine' and the 'Varaha' - the 3rd 'avatar' of Lord Vishnu. Unfortunately, the 'poll dance' is over with the 'haath ki safai' proving to be the 'hand' that will 'rock' for the next 5 years. Had this connection been 'discovered' in time… there would have been several ABC - XYZ… leaders professing to lead the 'Varaha party'… and urging the people to come out in large numbers and vote for the 'swine' so that they could establish 'Varaha Raj' for the next 5 years. They would have promised to defend the 'honour' of the pigs/varahas, thereby 'protecting' the 'culture' of India… !!! Would have been a great 'polloink plank'… what say?!! And Oh before I forget… several newspaper/media offices would have been ransacked by now… for referring to such a 'sacred' animal as 'swine'… !!! Calling anybody a 'swine' would have been classified as an offence of the highest order... inviting the capital punishment... you see, how can a mere mortal be bestowed with the 'honour' of being at the same level as the 'holy' varaha??? Not done. The Tamil word, "Porki" (also used in the Malayalam, Telegu and Kannada languages) will be struck off the vocabulary... to pay obesience to this 'sacred' being. This will in turn result in the stalling of the Kannada movie "Porki", starring the 'Challenging Star' Darshan and Pranitha Subhash. Fearing heavy loss of revenue, in these hard times, the Producers will rechristen the movie as "Turkey". Whether the movie will hit the 'bullseye' or lay an egg or a turkey at the box-office will be known after it is released... till then the 'suspense' continues. Perhaps the "miss_teerious" girl should make an attempt to solve it... !!!
The 'Varaha Party' would also have a 'sacred' students' wing... to be christened as the 'Varaha Sena'… !!! As you know, masks have become very popular ever since the Gujarat satrap got his supporters to don them (the Modi masks). The 'Varaha Party'/'Varaha Sena' members too would wear masks… in order to look-alike and thereby bringing 'uniformity' to their campaign and identity… as well as to distinguish themselves from the 'hoi polloi', the 'aam' jaanta... pigs/varahas do not eat 'aam' you see (!)… and no prizes for guessing which mask that will be, though!

(Stay tuned!)
Note: Cartoons courtesy: http://cartoonistsatish.blogspot.com and http://www.cartoonstock.com
Photographs:
Hilarious takes on the 'scenarios' created due to the "Swine flu."
Posted by Roshmi Sinha at 6:45 PM