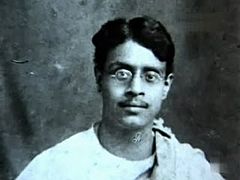 I wanted to do this post on Tuesday (30.10.2012) itself, to coincide with the occasion of the 125th birth anniversary of arguably the greatest humourist-satirist of all times - Shri Sukumar Ray.

The incorrigible Bengali in me wasn't being 'lajee' err, I mean: trying to 'conserve energy'; and despite the nip in the air, thanks to Nilamdidi, I was not contemplating on 'hibernation' either.

... I simply decided to spend my time reading that nonpareil genius Sukumar Ray's evergreen works, instead of putting thumb to keys. :)

Here is a link for you to read them too. [It is in Bangla though]:

The task of encapsulating the essence of Sukumar Ray in a single post (or even in multiple posts, for that matter) is colossal; it is simply beyond my limited talents. So, do watch this short documentary film made by his illustrious son, Satyajit Ray (in 1987, and released the same year - during the birth centenary year of Sukumar Ray, who was born on October 30, 1887):

This is the last documentary made by Satyajit as a tribute to his father, before he too passed away on 23 April 1992. Here is a bit about this 30-min documentary-film: Link.

Here is Satyajit Ray and Akira Kurosawa (regarded as one of the most important and influential filmmakers in the history of cinema):

It is erroneously said that Sukumar Ray wrote mainly for children. His works transcends all sorts of barriers, including those of: age, gender and time. A child can read them and so can an adult, whether a youth, a middle-aged person or the elderly. The humour, fun, wit and the satire part remains intact. What changes, or rather manifests itself with each reading, are the numerous layers. It is an exciting and fun-filled journey of discovery - one that begins during one's childhood and merrily continues until one's 'destination' has arrived. Therefore, one can never tire of them. Never. His works cannot be slotted with respect to events, personalities or generations either; 'coz they are ever relevant, and hence, their appeal will never diminish.

Sukumar Ray's works or legacy, if you may, have endured and will continue to endure. The true essence of humour, fun, wit and satire, in my humble opinion, is its ability to endure, and do so without an overwhelming amount of bile. Perhaps especially: without bile, i.e. in the complete absence of bile or vitriol. Sukumar Ray has achieved this, totally and completely... and effortlessly as well. And this to me is the measure of his talents... and of his greatness.

Vitriol or bile rankles. More often than not, it misses the mark and opens up yet another tributary, so to speak. Wherein: the one that was doing all the gleeful target shooting (suddenly) finds himself or herself in that awkward and unenviable position of having to pay tributes to the until-then hapless target - for some unintentional or perceived slight. We have ample examples of this, right? By contrast, intelligent satire sans vitriol finds its way into even the innermost recesses of firmly shut and airtight hearts and minds, then makes its point and leaves its imprint too. And Sukumar Ray excelled in this. Fortunately, many of his works have now been translated into English, and so, the non-Bangla-speaking world too can partake of some of these cerebral and intellectual pleasures. The flavour and taste may be somewhat altered though. For the epicurean Bengali, it is a veritable feast all the way. Always.

Sukumar Ray was claimed by that severe infectious fever, leishmaniasis, for which there was no cure at the time - on 10th September 1923. He was only 36. His only child, Satyajit [Bangla: Shottojit], was not even two-and-a-half at the time, though he has spoken about his first and few memories of his father, Sukumar. It was most probably recorded on the occasion of Sukumar Ray's 50th death anniversary in 1973. Satyajit has spoken in impeccable Bangla, marked by his characteristic lucidity and baritone. In that narration, he has also regretted not having access to the original manuscript of Ha Ja Ba Ra La (A Topsy-Turvy Tale), and the original illustrations of Abol Tabol ("Rhymes without reason" or "Weird and Random"). What a loss!

Here's an illustration of Abol Tabol (tr: Weird and Random or Rhymes without reason):

Sukumar's father, the great Upendrakishore Ray (Ray Chowdhury; Bangla: Upendrokishore Raychoudhuri) too was a genius, but has been (sadly and inexplicably) slotted as a 'children's story writer' ... not unlike the slotting that Sukumar Ray's works have also been relegated to. Why and how, I have not a clue. Perhaps the ones that did the slotting were even bigger and better humourists and satirists, who, for some reason also never put pen to paper. Or perhaps, they did, and those pages promptly made their way up the 'food chain' around assorted carts that sold jalebi-s, samosa-s, bajji-s and the like - in those days.

[These are a few lines from the immensely popular "RamgoruRer Chhana" (link) from one of Sukumar Ray's masterpieces: "Abol Tabol" or "Rhymes without reason". It is about people who are humourless or humour-resistant. Congenitally. The ones that treat humour with fear or for whom sunshine in the form of smile and laughter is a calamity worse than forking out large amounts of taxes, not that they are fond of paying small amount of taxes even.]

Here is the famous RamgoruR/RamgoruRer Chhana as sketched by Sukumar Ray:

Many words and phrases invented by the father-son duo (i.e. Upendrakishore-Sukumar) have become an integral part of the Bangla language. Several characters invented by Sukumar have become legendary in Bengali literature and culture; some characters have even found idiomatic usage in the language. E.g. in the popular movie "Miss Priyambada" (released: 1967; genre: a comedic far-fetched 'romance') that starred the grand old man of Bangla comedy: Bhanu Bandopadhyay and his great friend and on-screen Hardy: Jahor Roy, Lily Chakraborty's character dubs her maternal uncle-approved rotund suitor as "KumRo Potash".

KumRo Potash (link) is the name of one of Sukumar Ray's famous rhymes, and this word is now an inalienable part of the Bangla language as well. [Kumro = pumpkin, but "potash" is impossible to translate.]

Do make your acquaintance with KumRo Potash:

Bhanu Bandopadhyay also used this poem in another of his well-loved films: "Personal Assistant", a sort of romantic-comedy, unlike any that you have watched (outside of Bhanu Bandopadhyay's universe, that is). This 1959 film also featured actor-singer Ruma Guhathakurata and Tarun Kumar (younger brother of Bengal's matinee-idol 'Mohanayok' Uttam Kumar.)

Here is the sketch from Danpite:

Sukumar Ray has combined two seemingly meaningless words into one - to formulate a Portmanteau, and this has in turn created new animals in his works, like the Haansjaru (duck + porcupine), Bakacchop (crane + tortoise), Girgitia (chameleon + parrot), the Singhoerin (lion + deer) and even the Ramgorur (human + lizard + cow) that also laid eggs! And whose nests were stuffed with scolding, where even the wind of humour is banned; where: you're not allowed to laugh !! [Ramgorurer basha / Dhamak diye thasha / Hashir hawa bandha shethai / Nishedh shethai hasha...]

Here is some more info on the great Upendrokishore Raychoudhuri:

Here is some more info on the nonpareil genius - Sukumar Ray. Please do read:

Khichudi (Hindi: Khichdi), as you know, is a common dish popular all over India and amongst the Indian Diaspora (the probashi Bharotiyo) as well, a flavourful mixture of rice and dal (lentils) cooked with spices; also used figuratively to mean a hodgepodge or mixture. The Anglicized spelling was kedgeree.

Here is the giraffe + grasshopper/phoding: 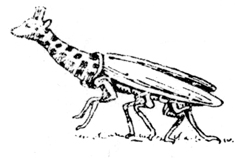 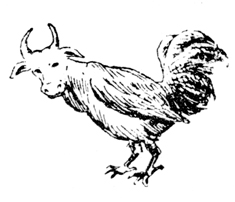 Sukumar Ray's legacy is a treasure-trove of laughter and fun, satire and humour and a commentary on things, persons and events that we can still find around us - 125 years after he was born and 89 years after he physically left us. But it is practically impossible to translate. For those of us that have grown up soaking in the magic of Ray's lyrics, nonsense rhymes and rhythm, our childhood (and beyond) would have remained incomplete without his priceless oeuvre.