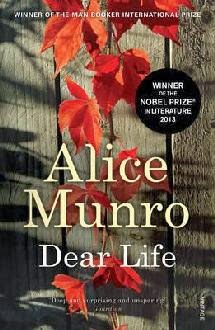 Alice Munro, the doyenne of Canadian literature, is primarily known for her short stories and has published several collections over the years. She won the Man Booker International prize in 2009.

(On a side note: Why is it called the 'Man' Booker? Maybe overly-enthusiastic title sponsorship. It was called the Booker-McConnell Prize or simply the Booker Prize from 1969-2001. ... Umm, at least it's not called the Adonis Prize.)

~ Winning the Nobel Prize in Literature 2013 perhaps enhanced Munro's reputation as a master of short fiction. The celebrated author announced her retirement at the age of 82 (last year). She is, perhaps, looking forward to doing something more sociable and less exacting than writing. Fame, or for that matter, the Nobel Prize, sit lightly on her unfazed shoulders. Apparently, she was simply unaware that there was a certain literature prize in the offing. One of her daughters woke her up with the news.

Dear Life is Munro's most recent collection of short stories. ... I've never read her until now, so cannot quite share my thoughts vis-a-vis this book against her 14 other collections of stories.

This 2012 collection, republished in 2013 (possibly in celebration of the literature prize), is (thus) the valedictory of what has been a sparkling yet unpretentious literary career, unaffected by the paraphernalia of widespread recognition or accolades (rare public appearances, modesty - that rare virtue). The last four stories "are not quite stories... one that is autobiographical in feeling" - the closest to an autobiography, that is.

Munro is a gifted storyteller; her writing is clearheaded, concise, thoughtful, sometimes lighthearted, sometimes entertaining, open endings, a somewhat wiser perspective, non judgmental (like Satyajit Ray framing his universe through the lens of his vision), no pretentious or flowery language, no overstretching of metaphors, no lofty cliché-induced sentences that purport to make a point but don't. Attention to detail is meticulous, although her prose and stories are quite unlike those of (e.g.) Roald Dahl, O. Henry, Mark Twain, R. K. Narayan, Ruskin Bond or Sir Arthur Conan Doyle. Not quite Kiplingesque. Not quite Tolstoy-esque or Hemingwayesque in scope either. Chekhovian perhaps. Somewhat Tolstoynian - in that the situation or circumstance is the protagonist. The 14 stories spanning across 13 to 30+ pages cannot be read back-to-back, any more than one would attempt to read 14 novels back-to-back. Each needs to settle in the mind, it requires processing; they resonate very differently on the palate and possess the heft of a Russian novel, reminiscent of old-fashioned Russian literature.

The stories in this collection is neither obscure scholarly stuff, nor the nebulous kind of short story that leaves one wondering what is it that one read and why it was written. They aren't cynical or satirical either. Instead, these stories are mini-novels/novellas; they have characters and storyline... and offer a glimpse into a bygone era. It is a series of simple tales of everyday life and aspects of human nature woven together in spare but easily understandable language. The author explores the what-could-have-been or the wonder of what might have been - an action not taken at a significant moment, a lifetime spent in contemplation... wondering why not, small choices, imperceptible shifts and incremental changes that at some point down the line, eventually result in a change of destination, unacknowledged mutualism between individuals (that form quite naturally), and the like.

Poor decisions and quirky characters: endearing and hopeless, hesitant and persistent, courteous and snooty, loudmouth and incurious, characters that seem to make a cameo appearance, mundane writ large... but who eventually transform the narrative. ~ The casual is crucial. The ordinary is extraordinary. Later in the book, Ms. Munro states, "We say of some things that they can't be forgiven, or that we will never forgive ourselves. But we do - we do it all the time". This is a recurring theme in her stories. ~ That humans are not perfect, they do things they are not proud of, so much so they may even end up hating themselves... but there is a letting go of bitterness and forgiveness eventually. And that, despite anguish or despondency, it is possible "to put one foot ahead of the other".

Most of the stories are not contemporary; some are set in post-war Canada, while others take place in the countryside and rural towns around Lake Huron in Ontario, around the time of the Second World War, probably because the author herself grew up in rural Canada in the earlier half of twentieth century, far from the turmoil experienced by her contemporaries in Europe. ~ However, despite her sparse prose the average reader can vividly imagine each tale's surroundings. Here are a few lines from "Amundsen": 'Then there was silence, the air like ice. Brittle-looking birch trees with black marks on their white bark, and some kind of small untidy evergreens rolled up like sleepy bears. The frozen lake not level but mounded along the shore, as if the waves had turned to ice in the act of falling. ... Everything austere and northerly, black-and-white... So still, so immense an enchantment. But the birch bark not white after all as you got closer. Grayish yellow, grayish blue, gray.' ~ The terrain is so bleak that the sky is "so immense an enchantment". But as the young woman (Vivien) gazes on her new environment, the subtle shift in perception is palpable. Where initially she sees only black and white, it is not quite enough; she will also need to see various shades of gray. And she does. She learns to see, accept and respond to her new environment/situation/circumstance.

Munro describes her surroundings in rural Ontario: 'Beyond the river was a patch of dark evergreen trees, probably cedar but too far away to tell. And even farther away, on another hillside, was another house, quite small at that distance... that was to me like a dwarf's house in a story.'

'Then a bridge was built across the river, and it began to dawn on people how much more convenient it would be to live over on the other side, on higher ground, and the original settlement dwindled away to the disreputable, and then just peculiar, half-village...'

Munro is a curious writer, not merely a chronicler or bystander. Through the words flowing out of her pen, through her gaze upon the world, she shines a light upon the lives of ordinary people in small-town humdrum life. Her innovative stories, ordinary stories about ordinary people, absorb and reflect all of these facets - a veritable mélange of emotions and whatnot: pain, dismay, torpor, wrinkles, challenge - to walk the line between stress and boredom, leisure, understanding, kindness, energy, surprise, flippancy, eccentricity, gaping solitude, despair, caricature, exaggeration, departures and beginnings, merriment and grievances, bittersweet and humourous, reflective and nostalgic, forward-looking and hopeful, transformation, homecomings - both symbolic and real, redemption or better times; through the spiritual and unifying, through human passions and shortcomings, through a patch of light on bark or walls, through the ordinary, mundane and human. ~ To summarize, Ms. Munro brings forth the essence of a certain kind of people as they existed in a certain place and era - two generations ago, including the humiliations of being a woman when merely expressing an opinion was considered unbecoming. The female characters in her stories are (sort of) in pursuit of happiness and/or freedom from their sense of limitation, constraint or emptiness in the world they inhabited; her prose brings forth the possibility and responsibility that come with that pursuit/attempt/effort; the men they leave behind aren't stereotypical bad or villainous. The stories are free-flowing and somewhat open-ended, there are no contrived endings. Instead, there's an unshowy gentleness, an insightful subtle thoughtfulness, a pellucid straightforwardness even... sometimes finishing with a lightness that is both liberating and agreeable. There's something in the stories that is vaguely old-fashioned - in the best way.

Munro is not quite a feminist writer (whatever that means) or an unembarrassed chronicler of particular abjection of being female (given the setting and arc of her stories). Instead, her stories contain whiffs of dry humour with perceptive young women wryly observing men's desire for dominance and other women's collusion with their own subsidiarity. In "Haven", a young woman staying with an uncle and aunt (while her parents are in Africa) sees firsthand the manner in which the uncle continually undermines his wife, or his (rather inexplicable) extreme dislike of a musically talented sibling. (Could it be that being music-illiterate he felt inadequate?) "There was a quantity of things that men hated..." the young woman observes. "Or had no use for, as they said. And that was exactly right. They had no use for it, so they hated it."

Munro tells women's and to some extent men's lives perceptively and deftly. A snippet from "Dolly": "I had thought how men are charmed by stubborn quirks if the girl is good-looking enough. Of course that has gone out of fashion. At least I hope it has. All that delight in the infantile female brain. (... they told me there was a time, not long ago, when women never taught mathematics. Weakness of intellect prevented it.)"

The book feels good to hold; hardly any editing errors. The jacket-cover is eye-catching - quite lively. There's a dusk to dawn light feel. Alice Munro appears in a mellow shade of yellow. Dear Life is embossed in white. Maple leaves - the most widely recognised national symbol/emblem of Canada is also representative of the passing seasons and their rhythms.

Picture: The book jacket cover of Dear Life. Courtesy: randomhouse.
Posted by Roshmi Sinha at 2:28 AM